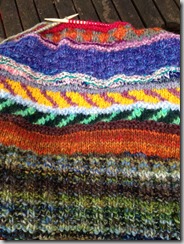 I am having one of “those” weeks…  I am living on Planet Shani obviously…. rant alert follows…

One of the great things about being a spinner and a knitter in our community is that it is a great leveller.  Everyone, at every academic status, whether they are unable to read and write, through to having PHd’s and beyond, mix together quite merrily creating gorgeous fibre goodies.

The only qualification you have to have, is being able to “ooh” and “aah” at the appropriate time when squishing the fluffy stuff… in whatever form it may take…..

The Gillet above that I have spun the wool and just knitted, is a personal best for me as all the wool was the same thickness, despite being spun over 25 years !!

Over the many years that I have been spinning (Since August 1990) – I have encouraged many people to join the craft, and egged others on to higher things.  The ONE thing they all had in common before sitting at the wheel – THE ONE THING – was “oh I can’t do that….”.

Guess what – they all could… classes of small children, through to 86 year old lady who couldn’t co-ordinate hand and foot – we found a way and she did…. THEY ALL DID….

I in turn, was egged on, encouraged, mentored and befriended by very many people – who guess what…. had absolutely nothing in common except the urge to create, explore and enjoy….

There is NOTHING WHATSOEVER about these crafts that is elitist… someone who can add up easily, helps someone who can’t…. think Mabel Ross, Elizabeth Zimmermann and many, many more locally….Amanda Hannaford, Jane Deane, – the list goes on.  All who have achieved academic greatness, but more importantly have enabled and facilitated others with their skills in a humble and helpful way.

So I was somewhat indignant this week, when some I know through Facebook put on her page that she was joining a Fibre Club being dyed by someone with a PHd and she was going to spin – with her PHd.  I thought ….”what the……” and then it happened….

Someone put a comment that they had a PHd and therefore……..

I won’t go on…. this makes me incredibly sad.

Now the lady running the Fibre Club is a fantastic person, an enabler and brilliant dyer… she has started up with another Friend some fantastic projects… which are great fun and facilitating many into the evils of the addiction known as fibre…

I am sure the person making the link on the Facebook page – is equally as nice… she obviously meant no harm….   and responded to me kindly, saying that it was just a nice link……. but I do suspect I now understand why she “ploughs her own furrow”… her comment not mine…

The Fibre Club about scientists – is a lovely idea…inspiring….. So many female scientists have been overlooked, as well as others in very many fields which impact into our world today….

BUT when you join it together the way it was…. suddenly we are back to something I thought I had left long behind long ago…..elitism

This is why crafts “dye” out – because people think they can’t start, or learn etc.  They are intimidated by the superiority of the person demonstrating.

I left a lovely Guild years ago (well lovely when they weren’t in a public space!) because I was so embarrassed when I saw their public spinning demonstrations….   Children, inspired and desperate to learn, refused access to a valuable wheel because of their muddy boots.  Demonstrators so busy chatting to themselves they were ignoring the public… the very reason they had been given the free tickets to see the show !

Well it was a muddy fair – your wheel could have stayed at home – and surely the rickety old Ashford which got brought to every meeting could have made an appearance, appropriately, here?  No instead you were so busy showing of your skills, you left many young people thinking that this was something they shouldn’t aspire to do… and were quite rude to others !!  Not a good way to bring newbies into the craft.

I was mortified and powerless to change the thought process, so walked away, literally and physically.

Spinning very nearly died out at the turn of the last century, along with weaving and dressmaking after the last war.  That would be unthinkable now…. or would it?

What we see as crafts to while away the hours, others saw as chores and onerous… they had no choice – we do.

Spinning is one of the few crafts which is achievable at entry level cost – ie a drop spindle and a bit of fluff… You don’t need fancy gizmos and wotsits…. but you can if you want – that is not excluded either…and therefore it appeals to each and everyone of us…. it is achievable..

I also have enjoyed the support and friendship of many people in the craft world – knowing that for an hour at least – cares can be put to one side, and our combined focus is on creation of fibrey things…. we are all equals….

I care passionately that doesn’t change…. So just unfriended the person on Facebook – the first time I have ever had to do that… and wrote this post…. to share with you my thoughts…

Some further links if you fancy spinning…