… are something to celebrate as they give me an excuse to knit….. and think… 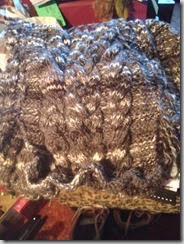 Last week, whilst admiring the Jacob that I was spinning for Joshua’s Gardening Gillet – and trying to think of something I could do to be kind to myself, my eyes spied some of the spinning in progress for Joshua’s garment.  It was actually also supposed to be for a hat for him, so I have ended up having to reorder some more today which I begrudge, when you consider just how many fleeces I have in the sheds

Oh well a girl can never have too much wool.

I think it goes to show what state of mind I am in…. 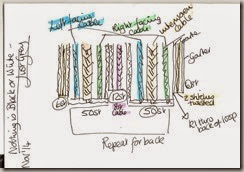 This was the draft chart !!

The central cable is an interwoven cable – and the side ones are left and right facing, with a sort of Peplum effect at the rib.  I am still trying to work out how I can insert another colour here, without making me look already fatter than I am.  I have my eyes on a red blend I ordered a while back Autumn, which is a tweak on Tessitura (I so hope I haven’t confused you totally now !

Not sure either about the cable feature up the front of my fat apple stomach – oh well !!

I like working patterns up in a series, just to see how far they can go and how many ways they can be used.

This is the detail from the quite unpronounceable Máthair Chríona Cowl I am knitting.  The name means “mother of the heart” in gaelic – and is another term for Grandmother, which I am about to become again… love all the excuses to make little people clothes 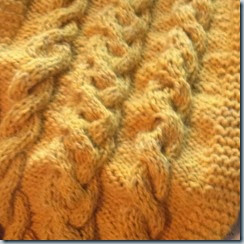 So – my kitchen might be still stacked high with dishes -

but I have the memories of creating a meal with Toby on Sunday to motivate me to get it sorted… along with one of the Cheese, Onion and Potato pies he so happily created.. 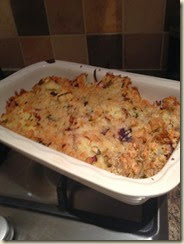