The Journey is the Reward

I need a logically coherent way of living, which doesn’t seem to be able to be achieved

So in between sunning myself on the Decking, I am concentrating on moving on with the WIPs in my ever increasing pile.

Oh, and I am going to be a Máthair Chríona ( gaelic for grandmother – meaning literally mother of the heart) again.. Joshua and Holly are expecting their first child, due March next year.

Even though I have five adorable grandchildren already, each one is a blessing and I am incredibly excited about the first “Phethean-Hubble” – I just hope this one sleeps a lot better than its Father and Uncle – for Holly’s sake

So I have lots of Baby Knitting, followed by Joshua’s Gardening Gillet – mostly spun up in piebald Jacob Wool – pattern now written and underway 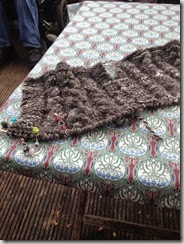 Mr Odin’s Fishing Bodywarmer  is also in the happy state of progress.

I have seriously committed a great boo boo here.  In the chaos of the last five years, I have managed to lose the samples and details of this fantastic wool.

I know it was purchased as a roving from Wingham Wool in about 2011 (just before chaos entered our world.  It was a limited edition blend, containing: three shades of blue, dark, medium and a beautiful combination of taupe/dark olive green, and light/dark grey. 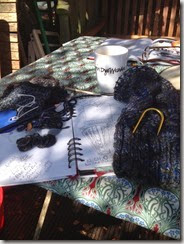 But that is where my knowledge stops.

Toby’s fishing gillet needs some more spinning done, and the new samples are now with me and that is a project for next week.

Whilst I am on a roll though, I have two skeins of 4 ply which have been winking at me now for a few months.  I suspect it is going to be a very cold winter, so I have decided that I am going to knit a cowl – I have chosen Splice – as the two skeins will contrast each other well.

So having given you a brief glimpse into my chaotic headspace – I am off to continue my journey – as I am told “the Journey is the Reward” – I do so hope so…..x