Whatever the weave of this life that you've spun…

“ When the last ship sails”  “When the boat comes in”

Ships, boats – all kinds of marine activities – are an analogy that we hear all over the place – in music, word and picture.. taken to mean/portray bad times or good times…

and I couldn’t sum it up better myself – so won’t.

I originally heard this album, being played live by Sting and Jimmy Nail – after I rolled in late one night and was doing some channel roaming in an effort to quiet my mind.  I caught some lyrics…

I suppose that is a “hook”?  whatever the technological term – it spoke to me, resonated emotionally, and I could relate to the rest of the tale - I was “hooked”.

“Weave of this life that you have spun” – yes I can work with that analogy and thinking about it and writing about it brings tears to my eyes – emotionally very personal.  I love the life I have woven and much of it has been “spun” by me…. it all just gets a bit muddled at times… I think it is fair to say.

The rest of the album is a musical tale – which I can visualise and cast Catherine Cookson characters playing out the parts.  I was particularly haunted by a folk tale involving Brunel – each song references different musical styles – clog dancing, Elvis impersonators, sea shanties – rhythmic rolling and folk timbres – even some spoons in there (my Dad could play the spoons !).

So why am I writing about it in my blog? – this isn’t really a review – I am just sharing with you something which is having a profound and personal influence in the soundtrack of my life at the moment.

I am baking cakes, sorting washing and singing along – the songs are haunting me and becoming part of me. 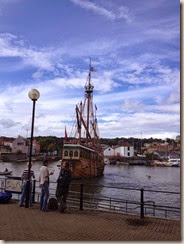 Sat on the Docks yesterday watching the Cabot come in, sitting in the pouring rain – chatting with my son about his sailing adventures… good times…

(I have put an Amazon Link to the last ship – any monies raised from goods purchased through my site are donated to a head injury charity, or used to purchase art/craft materials which are given to a brain-injured person in the community who is not “funded” - my way of giving back to a community which has given me so much support…)