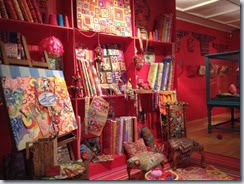 Reading some of my friend’s most favourable reviews on the Exhibition currently being held at the American Museum in Bath of Kaffe Fassett work, I thought it best if I went along to see it before it closed (as I normally manage to do – time just seems to “leak” from my days) especially as it was just around the corner.

“If fruits and vegetables did not have the mundane role of feeding us, they might be every bit as revered as flowers and trees”  Kaffe Fasset – Glorious Needlepoint (1987)

I think the same could probably be said for the relationships of Art and Crafts.  Art is revered and crafts have the day to day mundane role of supporting our existence.  Cups, plates, tables, clothes – are all crafts – but aren’t they a lot nicer if they look nice and are artistic and feed the soul as well?

In the exhibition there were many examples of his craft – not from his hand – it seems most of it has been worked up by craftspeople and some unfortunately are now showing their age – suffering no doubt from the wear and tear of exhibitions.

You can clearly see Kaffe’s journey through various “schools” of thought.  Colour ever present, through geometry, cabbages, pennants, poppy heads – flowers.  Diverse mediums explored – knitting, rugs, crewel and tapestry stitching and now quilting.  But there were some really excellent examples of his artwork.

I was though, I must confess, incredibly disappointed.  Even though I was in the company of so many Kaffe devotees – many of whom rushed to his defence when dared to question their deity’s judgments in colour and context… oh dear.

At the time I decided it was because of the sheer amount of colour – cloying and sickly all in a very confined space on a hot day – it felt as if I was entering a very crowded cottage garden with all the scents and colours vying for prominence and dominance.   It actually made me feel physically sick.

I don’t think I would feel this way if I hadn’t seen the exhibition last year in the Welsh Woollen Museum.  There it was excellent – it had been curated using the museum’s displays as a backdrop – so the work felt in context and stood out – if I adopt the same metaphor – like specimen blooms.  Even though the actual space was probably not very bigger – it felt a lot airier – there again, it probably was because there were far less visitors. 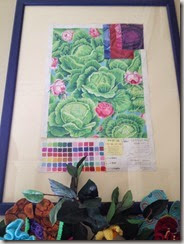 Disappointed I went back to the main house, and there I found a number of linked exhibits – this time curated so you could see the work underlying the finished products in the main exhibit.  This made far more sense to me.  I then found a number of line prints that Kaffe had undertaken at the Museum back in his early student days.  These displayed to me an elegance and draughtsmanship which seem totally lost in today’s consumer branding.

Going back to the main exhibit.  There were a lot of pieces of knitwear for sale – declaring Kaffe’s name and claiming to have been knitted by him.  Incredibly priced – far above and beyond that you would reasonably expect to pay or be paid for a basic stockinette scarf.  I do hope they are not breaking trading standards and are knitted by him – as these were probably the only pieces in the whole place which claim to have come from the hand of the man.

So as I flicked through the bookshop deciding my day was a bit of a waste of time and effort,  I found some words from Chief Seattle written in about 1854

This stopped me in my tracks.  Not a week ago I spent a few hours of my life writing a “rant” on the very subject of no quiet place and the importance of it in Toby’s and our family life.

“Where is the thicket?
gone
Where is the Eagle?
gone
The end of living and the beginning of Survival”

Very profound and could describe how I have been living for the past few years quite well.

So – at the end of the day – all was not lost and I found inspiration.