It seemed as if I had all the time in the world when I woke up this morning to get all my “odds and sods” done.

The kind of jobs which make my life run smoothly – but if left undone trip me up !!

Now it is half way through the afternoon and I still have plants which have not been planted – drying out in their transport containers, and there is much and many things not done – and now I am stressed trying to identify the important tasks over those which will be ok to sort out tomorrow.

But the sun is shining – bees are humming – birds twittering… all is ok with the world.. 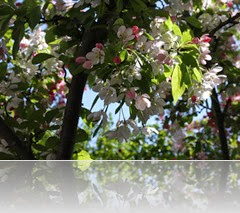 and much spinning is “not” sorted.

I like to keep my records of my spinning adventures quite clear and up to date, as my memory is very cluttered, as I keep being pulled into other projects and the demands on my time exceed the number of hours in any given day.

Unfortunately though the blending projects I have been up to, have had to keep being stopped and restarted – with appalling light and weather conditions in between.  Today though I have had a chance to photograph, but now the accompanying records aren’t to hand, and I have lost track of the order I am doing things in.. hey ho. 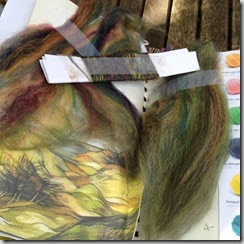 This is the Wood Mill Blend, which found itself renamed Folly Fields (ii).The (ii) because it was the second in the series, Folly Fields, because I found myself spinning this whilst looking over fields in identical colours the weekend of our Son Joshua’s Wedding. 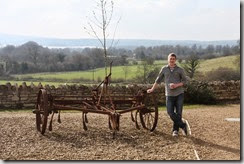 Folly Fields(i) was inspired by one of the pictures on the Guild of Spinners, Dyers and Weaver’s calendar (I think last year).  I have looked to see if I can find a credit for the tapestry but there isn’t one to hand unfortunately.  It was blended four times (not the two in the World of Wool records) and contained the mallard blue in silk, which proved impossible to distinguish in the final blending. 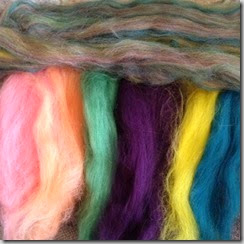 It is spinning up with a very tweedy effect.  Fox Brothers have indeed a tweed in this colourway I later discovered. 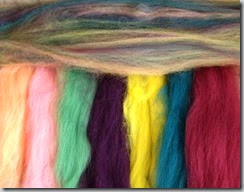 This was the second blend, where I have added another colour and with less blending (x3) I am able to see more of the individual colours and tones in the final spun product. 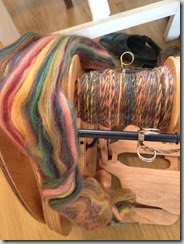 A rainbow of fields.  The salmon and pink were very much of Devon though, the dark tones of the aubergine and claret – fields and woods. The yellow – the rape seed and the green – well what is left in a winter landscape.

Both the blends are going to be used in Toby’s Gillet – now the spinning is nearly finished.

So – finishing my cup of tea – that is all the time I have this afternoon – oft to garden centre I go.

My culinary exploits are now pushing me to source ingredients I cannot buy off the shelves, so have decided to have a go at growing them myself.

All sounded to easy when I started.. but now I feel as if I am fighting the wind as the tide of life takes me off on another track !

Time and Tide really do not wait for anyone – including me it seems !