Just one Day of Solitude…please that is all I need… 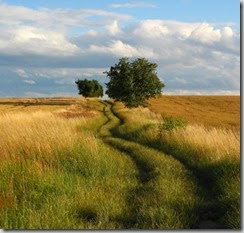 I give up … cease fire please….

Little old me is waving the white flag with head tentatively peeking over the privet hedge.

The demands upon my time (and depriving me of much sleep

) have become quite overwhelming and I have been going through a period where I felt totally powerless to do anything about it.

So on a craft front – things have ground to a halt from all this overwhelming chaos.  We also have a large family wedding at the end of next week, and the chaos and demands upon time which this has caused really wasn’t predicted by me.  I was organised months ago, but it appears others were not ! 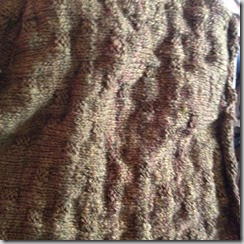 I got back to working on the Fields of Barley Gillet which I started over the change of the Year from my handspun commissioned roving.  It is based on a shape that has successfully worked for Bruce before – so much so sometimes you can smell the bloke arriving and it has to be forcibly removed from his back and laundered.  This time I am using the wool which I had blended and I would never have guessed that the colours chosen would blend they way they have into mute muddy khaki-brown.  Not my cup of tea, but very much his.. 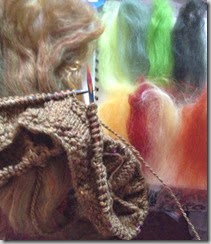 I had a second batch blended with 5 colours instead of 8 – and the higher silk content plays with the eye and lightens the whole effect.   I also only had it blended three times instead of four, so the smaller amount of colours pop out more.

I have learned so much from this project – and so have now started spinning Toby’s Woodman’s Gillet. I am going to knit his longer at the back and shorter at the front, so he can wear it over his shoulders in comfort in the wheelchair.

I am going to use leftovers from Bruce’s to add texture and detail to Toby’s and vice versa.

Even though I am totally on the fence about the colour, the feel and texture is beautiful and the drape I am really pleased with.

The mammoth baby knitting has drawn to a close.  I now only have one baby cardi to finish for a beautiful little girl.  The socks now have drawn me back in, Toby is complaining that I am not picking up his dirty ones and laundering them quickly enough !!!! 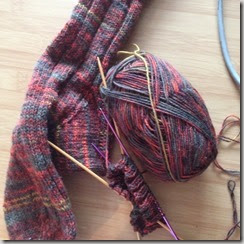 Toby’s Mercedes Socks are from Regia wool, and have a lovely feel of quality about them.

Also the shawls for the Wedding are on the needles. These are based on my

Duilleogaí Fomhair (Autumn Leaves) pattern.  I still haven’t been able to sort out the charting, despite loads of requests for it.  It is quite frustrating, as it is very simple – hence the number winging their way off my needles.  I have signed up to JC Briar’s course with Interweave (obviously before Lent !) so will have another chew at this.

I have also put the basic left wing edging on Stitch Maps – and hope you can gain access to it, if you are interested in a closer technical detail.  The pattern is a very basic leaf motif, with leaves running along the edges, but the I have tweaked and changed to make it my own !

It is though my intention to put this pattern (written properly and coherently!) into a booklet with recipes, poems, paintings and memories to be shared with my children – and I will probably share it with you for a donation to a brain-injury charity. 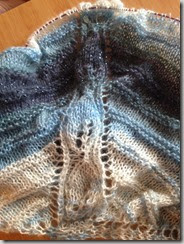 They are not being designed to wear as part of the wedding outfits but to go over shoulders afterwards – I have a funny feeling we are going to need our woolies being on a farm at the end of March !!

So that is pretty much were I am at today,and quite chuffed with myself that I was able to get a blog post written – finally – it is amazing what you can do if you shut the door and take off the telephone, and refuse to answer emails for one whole day…. !!