Banging my Pots and Pans… 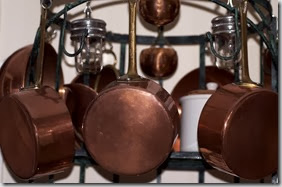 “All the world's a stage, and all the men and women merely players:
they have their exits and their entrances; and one man in his time plays many parts,
his acts being seven ages.”
William Shakespeare

This quotation is very familiar to me, but not often do I sit and actually dissect what the words mean.  Taking a moment today, I realised I am not clear about the Seven Ages of Man I have just sort of assumed I knew it, until actually challenged with thinking about it.  So I have found the fuller text, and one of the questions we the reader are invited to consider is, that after four hundred years, which of these Ages of Man remains true to life today.  Taking this one step further – which stage of life am I in?

Well I am not a bloke – that is clear – and what on earth is a Pantaloon?

So I think I am roughly in the Justice age, just after being a soldier (full of strange oaths, sudden and quick in quarrel – that sounds right !) and before I become a greedy and devious, easily fooled, comedic character (looking forward to that one – I have the costumes to hand..

So how does Shakespeare describe the Justice?

and so he plays his part.

That is what I am trying to do at the moment. Play my part.  The part cast and written for me years ago, and somehow no matter how I rail and rant against the stereotypical expectations, it is still the measure which is used – so I either fulfil that role or fail now.

I am trying to rejoin the society and rekindle friendships that used to be so familiar and comforting to me.  Unfortunately – we have all moved on, and some areas of my craft and quiet contemplations seem to have been hijacked and their status elevated to something I don’t recognise.

Trouble is, I can’t really ignore the comments and expectations (often subtle and silent, so difficult to challenge and correct when applied erroneously  to me), so have to find the way that I – the new me – with different lines and stage directions I have carefully created - now fit into this alien world.

The cooking, I am having a go out and have surprised even myself with recent successes. I was reduced to tears by a compliment about my dumplings over the weekend.  I had never realised that I needed that kind of validation – I live and learn.

But it is the spinning which has depressed me this week.  Along with the cold, wet, weather no doubt.

I have never been the type of person who sits and spins 50g over three months, dissecting the ancestry and bloodlines of the fleece in hand, and writing up the pedigree and pondering over the quantum mechanics of the dyebath.  Nothing wrong with that kind of spinner/dyer and I admire the knowledge they bring to the cannon, and find their company terribly interesting, just not for me – except of course when I am trying to study and improve my output !

I find the whole dissecting and analysing process, too aloof and puts a distance between the craft and creation I am practicing, making it precious and therefore possibly unattainable.

I am literally a homespun type of gal, rather than an employing an academic approach to the overall concept.   Listening to Perry Grayson and the Reith Lectures this week (I would highly recommend downloading the podcast to listen and take notes/spin or knit to) I am not alone in this rejection of some attempts to “poshify” something which is a daily humble task for me, as has been for many for many centuries.

I am a production spinner, by necessity, who spins wool, the colour of which interests me, at a speed and quantity which means I can get on with the product I am intending to make – which as it is usually big requires a few kilos – so that the product can keep me or mine warm at a cost which is affordable on a limited budget of both time and money.

I like actually “doing” not just “talking” about it.

But my wheel – my Joy, the workaday wheel – has died.  Well not literally died, just developed a crank and a clunk which upsets Toby and now starting to upset my karma (and others !) just to get a few ounces processed.  It did though enhance DH’s reputation though during a recent holiday.  I was mortified and am still blushing.

Despite everyone’s best efforts (thank you so much Keith and David from the Spinning Weal)  it isn’t repairable – so I have to accept the inevitable and replace. 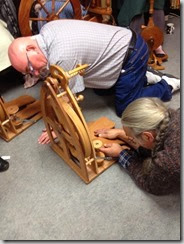 I am sad about this… and I have other wheels – but this one has been through many of my worst moments with me, so I feel slightly bereft.

A Viking burial was even suggested – November 5th seeming an appropriate time !

Hopefully, I can now get back to clearing the backlog of WIPs around the place, when the new one arrives later this week.

Not that I have any shortage of wheels, but I have shortage of space, along with need for it to be easily transportable.

So I can stop banging my pots and pans, a purely diversionary task I fear – satisfaction too fleeting and precarious to fulfil my soul (mind you Nigella is looking well on it…) and get back to my first love – textiles.

Nothing keeps you warmer than a colourful shawl on a dark night – and cheers the spirits.  Especially one you have spun and designed yourself !! 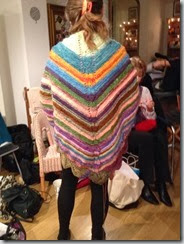 Not that I am smug or anything.