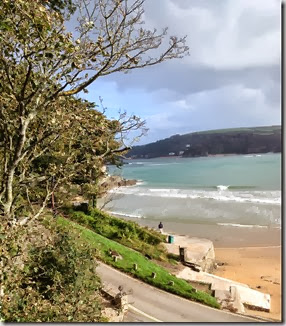 According to Saul Bellow (a Canadian born, Pullitzer Prize winner),”yet a way of seeing”.  I certainly have had my eyes opened to me today – and what I have learned will live with me and inform my work for a long time to come I suspect.

After the storms of last night which hit the South Coast, this was the view from my window – above is the left view – that is Fort Charles peaking out from behind the trees.  This is the view which inspired Tennyson. 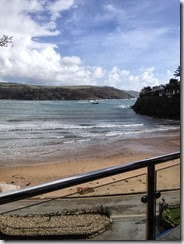 This is view if I turn to my right – I can see all down the Estuary from the balcony and the beach is fantastic.  Totally obscured when the tide is high, but when it is going out, played with and used extensively for recreation by young people, walkers and elderly.

This morning, after sorting some stuff from the car, I was hijacked by a runaway “Murphy” – a springer spaniel who thought, having exercised his pets thoroughly (they did look totally exhausted, yelling in hot pursuit!) that he ought to come into the hotel with me for a cuppa, and a rest (and no doubt a quick rub down)

I soon disabused him of this idea and much to my surprise, he quite willingly came back with me to the beach and on rejoining his relieved “pets”  – we discovered to much amusement his name was actually Murphy ! 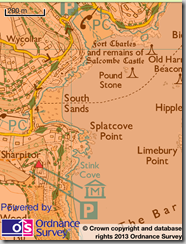 . I have managed to find a fantastic iPhone App, which allows me to download specific maps for areas that I am studying, the historic detail really adds to my sense of place on the ground.

It all looks very calm in the pictures I have posted here, but the ferry which leaves every 30 min to the centre of Salcombe has been suspended until this afternoon because of bad weather.  But bad weather equates to a fantastic opportunity to study waves.

So that is what I have been doing? – dissecting, photographing, analysing and generally trying to capture what I feel – not what I actually see. 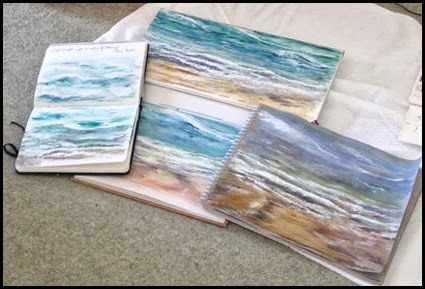 The energy of the wind and the waves is infectious. The opportunity to study these shapes for such long stretches of time have never been afforded to me before.  I feel myself not only consciously learning, but totally immersing and absorbing myself in the view.  To be honest, until recently I think I would have felt guilty about “wasting” my time – now it is totally “guilt free” – honest to goodness study and research as well healing time.

The space of the apartment is also incredibly conducive to creativity – I don’t have this amount of light and space at home (even if I do clear up – not saying I am going to of course !

So, eventually I was exhausted and there was no more that could be done today paint wise as I could no longer distinguish between colours, I went back to my Duilleogaí Fomhair (Autumn Leaves) shawl designing and re-wrote the left panel pattern AGAIN…. this time though, I wrote it as I was knitting – row by row - using the written instructions to generate the chart, rather than the other way around. 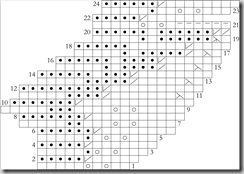 Now it looks like this – which makes a lot more sense to me – but seems a very funny shape for a lace chart  !! It does though look like a leaf now, so that I suppose is a bit of a start.

I am going to work through the instructions again though before trying to “flip” this version to replace the original one. I cannot believe it has been such hard work, and suspect that I am the one making it so

My comfort though, is that I am going to have to knit another version in commercial yarn for the christening shawl, so I have plenty of opportunities to try to write this up properly.

But to be honest – I don’t really mind that the chart does not appear commercially correct – I am enjoying doing the project so much and learning so much from it – so what if the chart looks organic and vaguely the shape of the leaf? Whose going to care? It is far superior than my scribbled illegible and contradictory notations, on miscellaneous scraps of paper (one or two always which seem to go astray!).

With a wink and a nod to Saul Bellow -

“What is a knitting chart – yet a way of seeing”