A leaf from the Script

I don’t know where to start with the tales of the last few weeks, so if I just say we have had another adventure or two – and are absolutely fine – You will know not to ask anymore !! 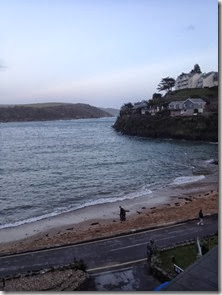 This though is the view from our hotel rooms – where we sought sanctuary and stillness to regroup our thoughts and restructure our lives.  Actually more like an apartment with our own doorbell !! Amazing what can be sourced late in the year when deals such as these are to hand.

We have spent time at Overbecks and are now at Tides Reach in Salcombe. The YHA accommodation is rather sadly going to close in November.  I am really upset about this, as our children and we have spent many hours here over the years.  A very unusual and special place where you can stay in the accommodation and then use the gardens (with NT membership) during the day.

I was always rather admiring of how two organisations could share accommodation – and now it seems they couldn’t.

Still while it was possible, I took a lesson today with a very talented tutor – their artist in residence - Charlotte Atkinson. A bit annoyingly we could have attended some of her classes over the past few weeks as we were trundling past – but like everything with the NT – it seems to be one of their best kept secrets!

I am really pleased with my work this morning – because whilst it wasn’t exactly a finished masterpiece – as none of my art is – they are more like voyages of discovery or snapshots of a moment in time – Charlotte very kindly helped me with some difficult technical stuff – such as pigment mixing to obtain colour of stone and also using pens in artwork.  All the kind of stuff I have spent years trying to work out how to do from trial and error, but failed miserably. 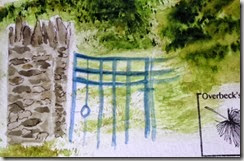 The perspective of the post and the shadow shadings are wrong (and we won’t even talk about the gate – which was only there as a placemarker !!) – but I wasn’t concentrating on that – it was the marks of the stone I am fascinated with and had been hopelessly unable to articulate on paper.

Now I know where to start, I can practice again in future.  For those still in the dark, the formula was Indigo and Burnt Umber used in varying proportions.  Lots of water for the first wash, and then with a Size 06 Brush, small the finer detail painted in, using deeper mixes.  The pen was a Dark Sepia Pitt Artist – but unfortunately my notes do not show whether it was a fine or superfine nib – so I have bought both for use in the future.  What is nice about the pen is it is waterproof, so I could have worked further on – laying down some shading washes to correct the distortions – but having achieved what I wanted to learn, did not want to spoil it.

Just one thing though – I don’t know about you – but isn’t it blinking annoying when you are quietly sketching, mind in another world, and people come up to you and offer an opinion (even if they have never painted !!). How many people must be put off from this quiet enjoyment for fear of criticism. 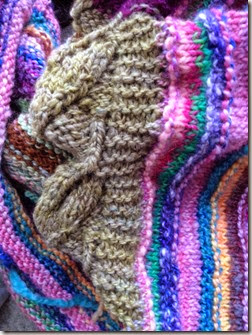 So far, I have managed to chart the main body (with mistakes) and sort out a left wing and a right wing – which hasn’t been a straight forward as it might have been !!! I decided to echo the leaf motif from the centre panel around the edging, and then realised it went only in one direction.  Simples me thought – all I have to do is flip it in the software and the pattern will reverse – like heck it did. 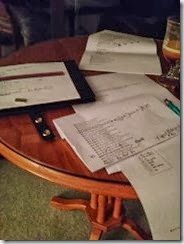 This is my table last night – after the fourth go at getting what is a very simple pattern when you are knitting it, into legible code for others to understand.

Because the pattern is based on an Irish Gaelic traditional shape – and hopefully it will go into our family knitting pattern book, I have renamed it – so as to get used to thinking of it with a nod to Irish influence.  I am also very confused with how to use the Ravelry handspun section, so started notating some of the pattern there, before I realised it was for the actual handspun wool design only.  Hey ho.. !

I am also going to knit this afterwards into a version which will be a christening shawl.  There was rather a bitter family division many years ago - not all of our children had their own shawl and this was raised as a crime against my parenting skills on a couple of occasions, so I am going to put matters right now in time for Great Grandchildren.

As for the rest of my humdrum existence and concerns.  They are all at home, awaiting my return – no doubt, but in the meantime.

Back to the sea view…