Waving from my desk – hope you are all keeping well? If not – big warm squishy hugs..

(Think one of the characters out of that film which involved Nuns leaping around the place – Sister Act – when you read the squishy bit…).

So – where have I been?  How have I meaningfully filled my time since I last chatted to you?

Well, great fun is being had on the cooking front at Chez Tobs. 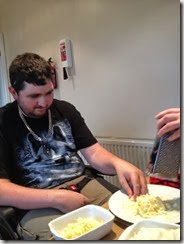 or should that be the “scoffing in between grating front?”! Nothing ever changes does it… I defy anybody to resist picking at the cheese when invited to grate the old gratin for a cheesy sauce.

I am doing my best to dredge from a bit of a wonky memory recipes from Toby’s childhood and we are spending a delightful few hours together most weekends having a go at recreating them.

To underpin this whole new voyage of culinary discovery though, I am undertaking immense amounts of research in the form of instruction and worship at the alter of Goddess Nigella and the other satellite Gods - River Cottage Guru Hugh, Ninja Nigel and of course where would I be without Jester Jamie and his 15 minute express menu.

One thing they all have in common is kitchens neatly stacked with a plethora of equipment – all looking very much more expensive than my humble stash and tools required for crafting.  I presume they are not all styled and set dressing, but are based on their day2day living needs and requirements?

All these years I had suffered abuse and ridicule about my stash – when the opportunity was open to me for wasting huge amounts of money, legitimately and without laughter and scorn, was staring me in the face !

So, I live and learn, and in the spirit of self-discovery, and with all the enthusiasm of a convert, I can now report this week I learned that whilst trying to light the oven with a match, it was electric.  To be fair though I have only had the cooker since 2001.  It is still being worn in really.

Last night I discovered how to switch on the grill.

I had already learned how to use the top burners, courtesy of Helen Melville a few years ago, when I needed to dye something (of course !). Occasionally since I have tried to use this transferable bit of knowledge to impress others that I do have a maternal gene, despite how recessive it is.

Perhaps I ought to just stick to watching the TV programmes? and proof reading the accompanying books – which stupidly I thought were manuals – guide books to the land of the Lost Horizon (and I even have the soundtrack for that running around my head!) and had been treating them accordingly, scribbling notes, corrections and advice with gay abandon, across the expensively produced glossy script.

Turning to other areas of my life.

I have been knitting like a Ninja – socks mostly… 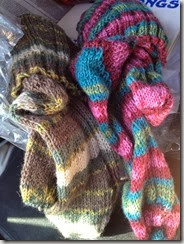 Three pairs – 2 for eldest son and 1 for his partner – in just under a fortnight.  “Why? You have nothing else to do?” I hear you ask…

No – he made me feel incredibly guilty recently at my neglect on the warm feet front – so decided to quickly do something about that, whilst I could.

What struck me though,whilst undertaking this marathon, was how many people commented that I could sell them…

I gave up arguing after the fourth person’s well-meaning observation floated past.  I guess I will return to this leitmotif again in the future.

I have also got myself organised to join a Guild again – now that I am no longer in the vicinity of Devon and Somerset.

I miss them greatly it has to be said, but after discovering a stunning 16C village of Steeple Ashton and the friendly members of the Wiltshire Guild, I think I can sit out my enforced emigration in some sense of comfort.

On arriving though, I was stunned to bump into one of my very first spinning mentors – who influenced my work greatly.  I was equally as stunned to discover that it was in 1992/93 we met.  It even feels funny writing that figure down, as if it was in the Victorian Age. 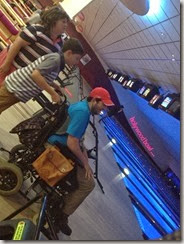 I will leave you with one of the images of the week – We went bowling as a family – fantastic time had by all, and memories came flooding back of the times we spent there with Toby as a child.

I can almost smell the burning today – oh dear, it isn’t just a memory, I really can smell burning – what on earth have I forgotten now… off to investigate…