Don’t Believe Everything you Read in a Paper

Some of you coming to this site this morning will be here because you know me and you know about our family, and in particular the awful accident that happened on the 25th November 2005 to our beloved youngest son Toby.

Some of you will be here because of curiosity, and others because they need copy for their newspaper and feed services, and can’t be bothered to work for it.  To give you a helping hand a shot in the right direction – I have made some comments here.

These facts were misreported at the time, and are now being relied upon again as fact.

The Judge found the Defendant to be at fault – THE GUY DRIVING THE BLOODY CAR (just to make it clear !!!) due to the speed he was travelling at, but that Toby probably contributed.  Well logically he must have been there, otherwise there wouldn’t have been an accident !!

The only way this could happen is with an injection of money – as all the care and equipment required costs money.  Toby can’t even do some of the most basic things in life without heavily adapted equipment.

That money that would not have needed to have been spent if he had not had the accident.

Just thought I ought to point that one out in big bold letters.

We declined the photo shoot of the champagne – it cheapens and demeans the hours of anxiety and tears which went into this case.  It isn’t our style to quaff unearned bitter fizz anyway.

BUT for the record - I did though share a cream tea at Harrods. Paid for by himself out of his state pension, and as you can see he enjoyed it – having been up since god knows what time that morning to try to get to London. 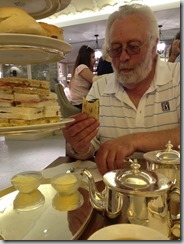 He has forcibly had to be relocated from his home in Bristol – because rather disgustingly there is no specialist Brain-Injury Unit in Bristol or North Somerset.  Something which is really going to hit home when the Neuro services are relocated in Central Bristol after the closure of Frenchay – next year I think.   Bath’s Unit closed in March this year – some joined up thinking there – NOT.

So hopefully we can now move on with our lives, and most importantly Toby can with his – as a Son, a Brother, Uncle and Friend – the brave, handsome and compassionate chap that he is.

and I AM SO PROUD OF.

As I am of of all our children.