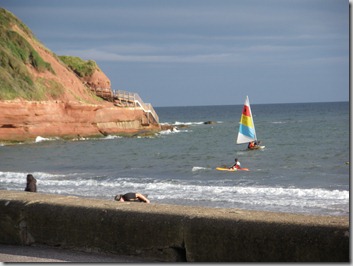 Preoccupation on the weekend was waves… I love watching them, I am mesmerised as in the space of a few hours the tide came in, totally changing the landscape.  The effect on the lighting with the changing cloud structures was also evocative and challenging.

The painting of them is a whole other story… not particularly impressed with my efforts, but in spending so much time “observing” the tidal progress up and over the beach – devouring the rocks and chasing off the people, I have learned a lot.  In the past I have always got around the limitations “I” find with watercolour (user-ignorance, not with the medium itself) by changing the brush and/or angle of attitude.  Then when all else failed, stick on some acrylic and pastels – a quick label change to mixed-media, and I can claim that was what I intended all along. 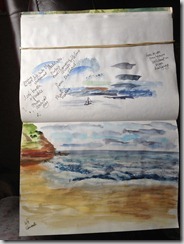 Looking at the sketch today, I can see where my interests solely lay.  The sky is a bit of a mismash – the beach – well, is a beach I sort of think, a spot of landscape for contrast (and I seem to have caught the colour of the Jurassic sedimentary rock despite myself !).

I did go on to write a poem though, so my creative senses were working quite well.   Whilst at the hotdog stand, we watched a small boy want to buy a ball, and his Nan did not have enough money on her, and I could see from her face she did not fancy trudging back up the beach.  We had a couple of pound and were happy to oblige.

His face totally lit up – and then he signed to us saying thank you.  It really upset me that I wasn’t able to sign back to him that he was welcome – well apart from a dodgy thumbs up.  He got the drift though and went off with his ball – his world complete.   Job done.

In a world though which revolves around communication – email, TV, etc  how bad is that and what does that say about me? -  that I could not speak back to him, yet if he were French or German I could have got to first base.  So I am going to rectify that.  I learned basic signing years ago as I worked a lot with deaf children and crafts – but I relied heavily on them communicating with me and I used the craft itself as a medium of communication rather than words, so am going to refresh myself now. 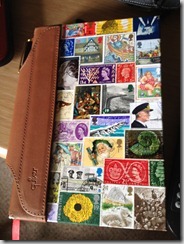 Just thought I would share with you my stunning new notebook.  I picked it up a couple of weeks ago at a craft fair, it is “decoupaged” with stamps, and my pen holder is a recent invention by Quiver.  So much easier to be creative, when you don’t have to scout around in your handbag looking for a pen !!