Picking up the thread…

So here we are, Saturday morning – again… just as the rolling waves reach their climax with the seventh wave (so I am told – we tried counting yesterday but kept losing track !!) our week reaches its end/start – depending on which way you look at it and today is one of those “fresh starts”.

Rant over at www.dyeverse.org – stay tuned here for craft “Planning” 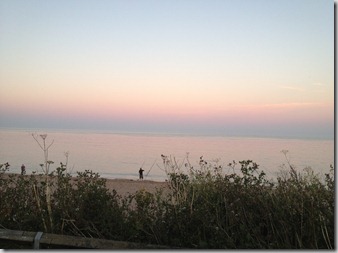 The week started off with a Blue Moon, and last night it ended up with a Pink Sky.

Yesterday on our trundles we ended up at Slapton Sands.  A beautiful place on the coast near to Dartmouth, where you would believe the tranquillity was timeless, but then I remember the horrific tales of the slaughter which took place there in World War II – within Chief Chauffer’s living memory.

I have been on a bit of a mission over the last few weeks whilst sat at such glorious destinations to work on my “wave” technique. 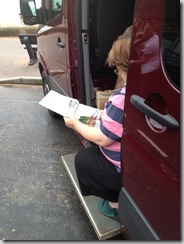 The side of the Merc with the doors open, makes the perfect vantage point for a midget with a paintbrush.  Even the little step assists !! I have all my equipment to hand, without wondering how to balance it all, and negotiate my podgy stomach. How perfectly planned.

I have been struggling with watercolours, even though I really am a mixed media person, because they are easy and portable.  But when I managed to paint over the white of the paper (ie not painting from lightest colours upwards) it is difficult to go back and correct.  Especially if there is a corker of a wave that suddenly enters the frame. 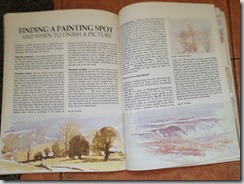 I have found a cracking book by Alwyn Crawshaw Outdoors in Watercolour.  I think it is now out of print, but still available from Amazon and second hand dealers.  There is a beautiful picture of a wave there, so I think when I have some stillness of mind I will have some goes at making a study of it.

After we had finished the many reworkings of my picture, and Toby’s camera was refusing to take shots of anything except black and white (because it was dark now of course !). We starting making our way back.

I must confess, even though the Merc is extremely comfortable to travel in as a passenger (as Toby was hogging his own front seat !!) I was blinkin cold.  So next on my knitting list I have decided has to be finishing off the Barn Raising Quilt which has been going on for ever, and I do only have three squares left (well 2 1/2 if you count the one in transit).  I am also going to knit myself some whizzy leg warmers, as I found myself doing an extremely odd dance around the back, in between the wheelchair, as I was trying to put a pair of socks which weren’t really fit for purpose.

Then I tracked down my Trad Danish Shawl which I had managed to somehow felt and given up hope for, and managed to delude myself that I was looking a bit like Meryl Streep in French Lieutenants Woman, as we boarded the lower ferry at Dartmouth.  I am not sure others were convinced, but hey ho, there are advantages to looking as daft as I do – people just feel sorry for that daft batt and leave me alone.

My memory jolted about my knitting plans, I feel a little guilty that two pairs of Toby’s are still on the needle, abandoned in the turmoil of the week, along with a pair for Josh.

Last weekend, when I was really in a bad way – the post arrived and… 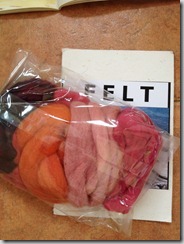 This amazing little packet emerged from Helen Melville of Fiery Felts.  Wow… Toby and I – armed and equipped with – amazingly now it turns out - just the right colours to use the photos taken yesterday as some inspiration. She’m psychic.  See it is the little things and thoughtfulness of my crafty friends (easily dismissed in the scurry of everyday “power planning”) that act as sea anchors to keep us focused on the really important stuff.  Colour, creation and just “doing”.

I know from some of the work I have done in collaboration with occupational therapists, that to heal, and give the noggin some time to reprogramme, sometimes you have to undertake crafts which don’t necessarily engage the full brain. I was reminded in the latest edition of the FeltMaker by Priscilla Kuzmanoz of New Zealand. She has written a lovely piece about her emigration to New Zealand and the importance of felting when overcoming difficulties in her life.  I can so relate

Felting, is simple and uncomplicated.  She says that when considering the use of felt she was looking for “ways of providing occupation that can be purposeful, healing, restorative and provide a sense of wellbeing”.  I can equate with that that..

Lastly – as we were finishing up last night, I accidentally took a photo of the ground by the step of the Merc.  I was going to delete it, as it wasn’t of a “notable” subject – but the beauty of the contrasting colours blew me away..

So perhaps the best things in life are those that are not deliberately planned, but sort of happen on the way, and I think it is recognising this and savouring in it - is the important bit, 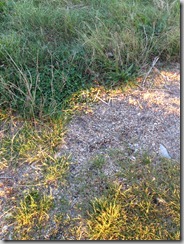 sometimes it is the simple unpredictable outcomes that provide the greatest satisfaction and noteworthy achievements.