Hi – can’t believe it is two weeks since I last wrote a blog – and such a manic one as that !!! But thank you so much for your lovely thoughts and constructive comments which really helped me resolve what I was thinking and how to implement some of my resolutions and in particular the music back into my life.

What I love about my readers – is that they are not “readers” or “fan girls/boys” (a phrase I have just discovered on Ravelry in particular in relation to the Allman/Rycroft discussions re the train wreck which is some favourite magazine titles) or sycophantic in any way.  You say it just as it is – and get where I am coming from – even when sometimes I don’t !! – well actually more often than not I don’t….

So where am I this morning with my thoughts…

Life is still really overtaking us, and despite all my best efforts I simply cannot combine work, rest and play.  We have plans in place now, and assistance is coming on board, but as I am writing this I am stressing out about the six months behind with the accounts paperwork I am – which ultimately is not actually my job and will not be my business – but I do it because this is the only way I can document what is going in and coming out and quantify what is needed in the future.  If others do it, they will not be making the same decisions and understanding it and analyse it as I am, so it really is something which is a) important and b) cannot be delegated.

This is also one of the reasons why “DyeVerse” – the brand and company really isn’t quite going anywhere at the moment.  I just don’t have the time to give it and what I do, and who I am, cannot be delegated.

One of the things which strikes me about small craft companies and something a lot of my designer and crafting friends have in common is that they run their companies in response to an illness and having to leave the “proper” job.  Nothing wrong in that at all.  Very viable way forward…

It isn’t though an option to do less work or have less stress in your life – it is very different stress…and to be successful it has to have a lot more invested in it of yourself, than you would in a hobby.  Nobody gets upset (apart from the recipient that is…!) if your knitting has to go on hold for a few weeks as life gets in the way.  But when bills have to be paid and deadlines met – well that is a whole different ball game.

My situation was different though – DyeVerse was capable and will still be capable of being a “proper job” – if I can get back to working in an organised fashion.  I am not really a kitchen table crafter – more or a workroom “worker”.   I have a load of wool which needs dyeing and preparing for spinning, I need somewhere to actually sit and spin in a more disciplined fashion – rather than in response to my stressful life.. then I need to put that wool to a use..

There is a lot of “needs” in that list – which translate to problems to be worked around.. positive rather than negative.. actually I need a conveyor belt… any going begging?

I simply though have just lost the structure I need to create - so bear with me – I only have one pair of hands.

In the meantime…. Socks…. Toby needs SOCKS…. socks at breakfast, knitting at lunch, knitting in the car – in meetings – when visiting friends – SOCKS….. never thought I would say this – but I am a little “socked out” - 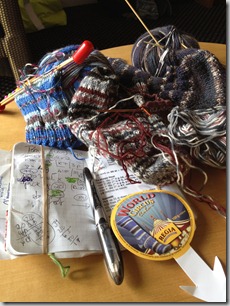 Toby’s feet and legs have changed size with all the physio and they don’t fit into commercially sized socks.  - so along with learning as much as I have about Cordwainers (how posh is that – I thought he was a bootmaker or cobbler!) I now have to get at least three pairs of these adapted socks so that there is one pair on his feet, in the wash and one spare.

I can’t do the complicated bits whilst travelling or talking, so the way I have found around this is to have a couple on the go and knitting simultaneously…. This has speeded me up considerably as I don’t have to think before picking the project up.. I was often too tired before.

a sort of sock conveyor-belt !!