Woke up this morning with my To Do list having reached an all time record, but still not being in the right location to do anything about it.

I have blogged over at www.dyeverse.org about some of the underlying reasons. 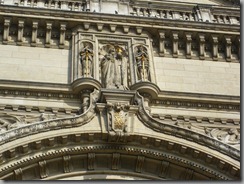 Still working through some of the ideas which emerged from the Heritage Crafts Conference on Saturday.  I don’t have time today to blog about them, but will do over the next few weeks.  I am using Live Scribe nowadays – which is a way of taking notes and recording what is being said.

My memory has got to the point now that I need this extra bit of prompting – and it helps me to review conversations in a different context – or later when I need some more in depth prompting, where notes and pictures are not enough.

Shani's Pen
brought to you by Livescribe

This was a little taster of the Upload, apologies to Patricia Lovett here for using her voice, and you can see by pressing it that the notes written in my own fair hand change colour as the recording plays.  Because I can rewind to specific places in my notes, by just using the notated paper which comes with the system, this is starting to be my preferred method of note taking.

Just going back to yesterday though – which I could somehow record smells. 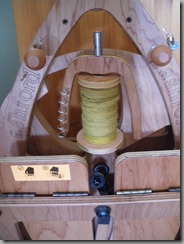 I have some spinning unceremoniously awaiting me on the wheel.  It was some natural dyed Weld (I think) which I seemed to remember dyeing last year.  Yet – when I thought about it properly – it was actually the year before we went to Court - October/November I think – so I have lost a whole year. A bit of a shock - Oh well.   Not quite sure about the recipes used now, and the wool is a lot harsher than I remember – so think I probably used both alum and iron mordant. 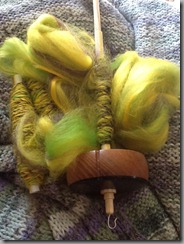 During the evenings, I am spindle spinning some lovely spring coloured roving – BFL, Merino and Bamboo from Hill Top Cloud, which I acquired through the Fibreholics (a random pack of assorted 20g).  Got quite carried away whilst watching Witness last night.

I had forgotten what a lovely crafted film that was.  Once you get over the romantic images of Amish life contrasted with the stereotypes of American police “whacking” – the film score is quiet and haunting and very relaxing to listen to.  Perhaps I should save some time and just buy the soundtrack?

Perhaps – I am more about the soundtrack nowadays than the actual imagery?  Now there is a thought to carry me through the day…