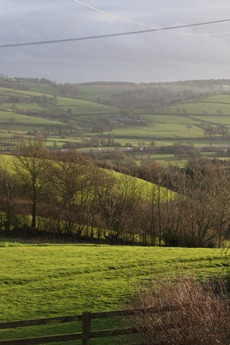 6th January, known to us as commonly as Twelfth Night, is in fact the Old Christmas Day…

So if you are still one of those who actually believes that Christmas Day is about the Celebration of Jesus Christ rather than a day of rest before venturing out to return all the unwanted stuff and take advantage of the Boxing Day Sales, this is welcome news.

It also explains something very deep within my psyche.  I have always believed quite irrationally and against all arguments to the contrary that twelfth night is something to celebrate, and attach quite undue superstitious fervour to taking down the trimmings before.

I have never understood why I hold this belief as it is very contrary to my normal way of thinking – especially as I don’t actually celebrate Christmas as a Feast Day itself.  So perhaps somewhere back in my dark distant family history I inherited this from those around me when I was small and every now and again catch a glimpse of magic in the dark and drab days which follow the removal of the tinsel.

So the fact behind the “feelings”

The Roman year was organized round the phases of the moon until old Julius Caesar realised (or rather all his advisers – astronomers, rather than MPs - did) that it wasn’t accurate . So it was changed to use the Sun as its starting point.  Unfortunately this calendar (the Julian) overestimated the length of the year, and despite all kinds of negative easements, the calendar was 10 days out by the time Pope Gregory XIII got to grips with the problem in 1582.  This new Gregorian calendar was adopted throughout Catholic Europe.  (So this is where I probably unconsciously picked up the vibe – my folks were always resistant to change for changes sake…!).

Now as we all know the Protestants and the Catholics hardly historically agreed on anything, and being quite resistant to change stuck with their way of doing things, which effectively meant that Paris was a full 10 days behind London…

Now that would never do, especially with travel etc., opening up, so the Gregorian Calendar was adopted in the middle of the 18C across Europe.

So the date on which we celebrate Christmas now, is actually wrong and it should be 6th January, if you keep to the Roman way of thinking – and after all, Jesus was a Roman so it is only logical they would have know when he was born – eh?

Today the 6th is known as Epiphany (the word itself is worth looking up, meaning Vision of God) and apart from taking down the trimmings has been significantly unmarked for most of us without religious knowledge.

The only reason I even went looking for the info today, was because I am reading a fascinating fiction book about a group of Amish women, and they referred to new and old Christmas within that.

The book is published in Episodes, so if you buy the first one for 0.77p and decide you don’t like it, or it doesn’t work for you, you are not committed to buying the whole book.  This appeals to me as I like to try before I buy and have found myself with a lot of nonesense on my iPad, and a lot of obstacles in my hallway and stairs I trip over, whilst I sort out what I really want to read.

I am thinking about undertaking a bit of an adventure down this episode pathway myself when I start back writing in the near future.

Anyway back to the stories.  They are really well crafted and the characters and issues they are dealing with are growing on me.  The authoress, Karen Ann Vogel, obviously has insight and personal experience of the community and I love all the little links and bits of knowledge that is included, such as traditional recipes and use of knitting looms.

Instead of trying to tackle a big project when I get myself back into the zone, I think I too will try some short stories with an underlying thread..

Back to my knitting and finishing my paintings…

and what are you up to?