What I really should be doing……?

Is everything that I am not !!  Short and simple answer to that rhetoric question.

I have been on a bit of a downer over the last few weeks after getting back from Court.  With a grandiose sweep of my hands and extravagant head gestures – I declare that everybody it seems wants a piece of me, and there is absolutely nothing more to give.

Nada, all done – emotionally bankrupt.  Six years of working horrendous hours just to get everything done has taken its toll.

We won’t know what is happening with the Court Case until early in the New Year.  I therefore have to keep on functioning – which is what I should be doing – cuz it seems that it is assumed that I am the only one who is not affected by the continuing economic crush which is upon us.

The clock continues turning, the night follows day.  Christmas is nearly upon us, with all the attached staff holidays and closures etc.– but there are appointments which still have to be attended and somehow we have to get ourselves and our loved ones to them..

So major inconvenience, but it is OK, we can sort it….

I am a “cup half full sort of gal”

But now it seems that this outward show of stiff upper lip and straight back is, I fear being misconstrued as my coping well.  As against who?  what benchmarks are we considering here?  Anybody else been through what I have in the last month?  stick their hands up.

I guess there are many who have been through similar in their lives and they have my empathy – I am certainly not alone.  But trust me – what has gone down in the last month beggars belief in the 21st Century Britain that I thought I lived in.

I think what I have been through particularly in the last few months is exceptional circumstances as defined by – well anybody….?  Let’s wait and see. 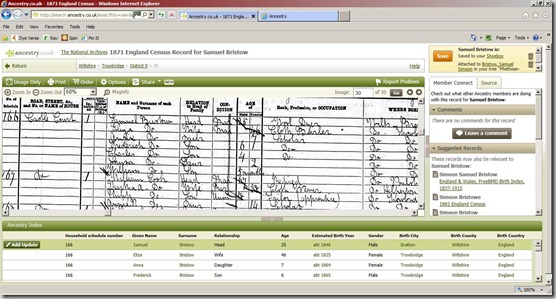 So as there is naff all on TV – I have socks to knit and poor evening light – and still can’t sleep I thought I would get stuck into my family tree again.

And look what I found… 2 x Great Grandfather was a wool dyer – now who would have guessed that?

So I would highly commend Family Tree Week (26th December – Start of January) to all those who can’t cope any more with reality TV and endless adverts..

That really would be the final straw for me….