Well today’s post is very late indeed, I have had difficulties engaging with life today, as I am sure many of my learned readers will empathise with.

I had a change of scenery last night, when I decided that I really needed to venture out of the four walls, and challenge myself to meet some new people – so I attended the inaugural session of the KnitnKnatter at the YHA in Bristol.

Very pleasant couple of hours, just myself – the organiser Lucy and a willing (or hijacked should I say) co-worker, Romy.  The ambition was boldly stated at the commencement of the evening that they intended to Yarn Bomb the YHA building – and make a statement, out there and be proud for the Harbourside Festival.  Once a week to meet and knit/crochet like the wind was the plan.  Having established that one of our company could not knit nor crochet at all, and the other was a beginner at crochet (but had produced a lovely fluffy dog) I felt that their ambitions were somewhat going to overstretch their abilities – sometimes the weight of aged wisdom is all too much upon my shoulders…

Still not to be phased by the impossible, I set too and assisted dear, and it has to be said incredibly enthusiastic Romy in casting on and knitting a few rows until the call of a free pizza and the Transformers led her elsewhere.  Still concerned that they might be overstretching their ambitions, and trying to suggest some more achievable ways of covering the building with Street Art, I was reassured by Lucy though that she had co-opted willing volunteers in her venture – so all was not lost.

I in the meantime cracked on with finishing another one of my Barn Raising Quilt squares, comforted by the knowledge that I only had another three to do.  Until I read the pattern that was and realised in fact I had another 10 – oh well… onwards and upwards… 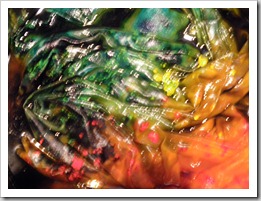 In the post this morning I received a shipment of Procion Dyes from DT Crafts  (please excuse the blurry photograph) which this afternoon dyed a metre of muslin, some habutai silk, some mercerised silk embroidery hanks and some merino/silk.  I had this image of a hanging to be felted and embroidered at the IFA meeting on Saturday at the spinning weal.  Whilst it all started off promisingly, as I came to bed – the dye pot looks very much as if it contains various shades of camouflage… so No 1 son will not be disappointed with my attempts this week – unlike last.

My eldest daughter has also taken up engraving – the kind you do on monuments (don’t ask….) and as she is currently practicing on small brass plaques (both sides) I have asked her to save them.  So all is not lost, if this is dire as it actually looks tonight, I shall stitch these plaques to it, after a bit of felting to brighten and add interest, and name the piece “Whispering Words”.   Should communicate something to someone somewhere?  or having I just been watching too much TV about lost pieces of Art.

Thanks to Carolyn Saxby’s timely tweet tonight, I discovered that the Hidden Paintings programme that I had so thoroughly enjoyed on Sunday, had a differing edition depending on which geographic area you in live in the Country.  Thanks to iPlayer, I have now been able to watch three programmes I would have totally missed, and tomorrow I shall finish the set.

I realised a few years ago that paintings go missing from public view – when accidentally, courtesy of the fledgling internet,  I discovered some paintings that belonged to municipality coming up for auction elsewhere in the country on the breakup of a councillor’s collection on his death.

Naughty, naughty – they actually belonged to the town not his bereaved (or should that be relieved) family.  One of the first really good uses for the internet I discovered – but in another programme on Sunday – Fake or Fortune – it seems that things are not improving and Sotheby’s are not doing quite the due diligence they ought to.  I wag my finger at you, and am incredibly disappointed, as auctioneers are the gatekeepers here to prevent crime and misappropriation – not just a sales portal.

My overwhelming sadness of the day is that it seems that I have injured my right calf muscle – so reluctantly I must accept that any ideas that I may have had about becoming a prima ballerina are over.  I am devastated.

It has been suggested though that I could perhaps take up being a backstage Prima Donna – for which I think my temperament is eminently more suited to….

Ah poor Romeo, just think what you are missing…….

Project I commend to you: Kirsty Hall’s Jar Project.  I am not sure I really “got” this when it first started, also the sheer amount of resources and perseverance was outside of my imagination… but as the year has progressed I am becoming mesmerised by it and much kudos to Kirsty for her creative stamina.  So is Toby – so much so he had his own Jar on his birthday…June 20th Jar.  It has been found, and I have just scrolled through to link you to the find record but can’t find it obviously.  I felt very maternal when it was reported to me, and so did Toby…

I really would commend this to you as an unusual present to give the person who has everything, or even just something to cheer yourself up with… Treasure Hunting with a sophisticated twist.

Blog to Inspire: Tales of Life and Yarn – delicious insights into a world I can empathise with…

Off to lie down in darken room… oh and for Brenda….

Natural Dyes, Fast or Fugitive (Paperback) - Gill Dalby – only £881.83 including delivery ….. honest…off to count books instead of sheep tonight….

It is true you can turn fleece to Gold…or is that “fleecing”….