The Process — from fleece to fabric | National Museum Wales The Process — from fleece to fabric | National Museum Wales

On our first visit to the Welsh National Museum on Tuesday this week, we were very fortunate to meet with Dewi Jones the Weaver.

When we arrived at his cottage, the door was very firmly locked.  We hadn’t realised the museum was as large as it was, and as you all know mobility is a bit of an issue nowadays for these intrepid explorers !  So we had a wander around said cottage, and still no-one in sight, until it was pointed out to me that there was a man in one of the closed off areas (duh!! observation was never my strongest point) The lethal piece of kit which undertook the willowing was operated by the watermill, which also operates other pieces of machinery in the Mill, which resembles in shape and size more of a cottage and barn.

The mechanised Spindle Spindle Jack is was made by John Davies in 1830 and is probably the only one of its kind working.  I think, if I understood Dewi correctly it operates with 80 spindles.

This one, taken from an American sources, pictures a 200 spindle spinning jack.

To vary the shades, Dewi combines dyed wool pirns with varying quantities of white filled pirns, and this mutes the shades.

Dewi also talked me through the dyeing process that he uses, involving a copper like the one I spotted at Snowshill being fired up.

His processes are dictated by the seasons.  During the warmer months he processes his fleeces (acquired locally or through the Wool Marketing Board) Radnor fleece is the local flock, as well as Welsh Mountain which can be found on the grounds of the Museum. He undertakes the dyeing and also the finishing of the fabrics so they can dry outside.

When it gets cold, he retreats to the upper end of the Mill and weaves.  I think he said he had woven 56 shawls last winter.   They are in the traditional patterns as taught him by his predecessor and he by his.

If he gets bored, he simply varies his routine… and with that he went off for his lunch… 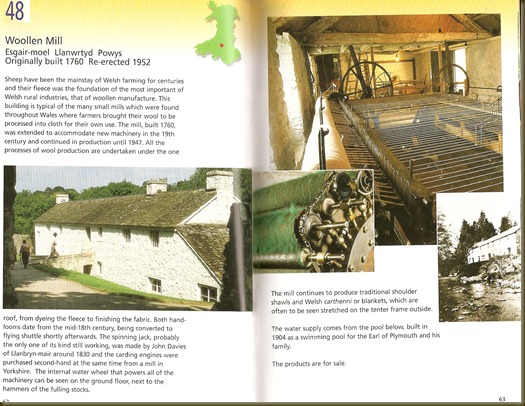 and I cast covetous eyes at the medley of colours underneath the Willowing machine… I am sure I have seen that turquoise before somewhere…? !

Fascinating insight into a lifestyle long gone…and a craft which is considered not relevant to today’s economy.