So Day 2 following on from the colour (with most of it having been forcibly dried overnight – so it was one very warm workshop I walked into, and smelling a bit like the local farmyard) we scratched our midget brains (as T calls mine !)

The majority of the attendees were knitters and wanted to knit, but lots of confusion reigned over how to knit with your own bespoke handspun.   We did some test spinning and then the penny dropped that some of those present were not spinners at all !

Not a problem thought I (over optimistically it transpired) experienced can mentor newbies whilst we got some of the samples knitted up into tension swatches, and mounted for show and tells.

But what I hadn’t taken into account – like all good tales - was whilst two of the ladies had been members of local guilds for many years and an authority on all things fibrey…they had never actually confessed to those they were issuing counsel upon that they were not actually able to spin. Oohps a daisy… I have undertaken some drop spindling in some very funny places, but the ladies loo of a village hall, has to be a first.  Drop spindling is not my strength at the best of times, but two in a cubicle was a sight to be behold. On the bright side the loo did actually make a very good place to stand on to “drop” the spindle.  Thank goodness nobody came in, otherwise what is left of my reputation would be in tatters !

After a while, Madam  became confident enough to emerge into the rest of the group with enough knowledge to blag the rest, and after I had a few moments to myself to recover (there are times that I regret having given up smoking!) I returned to the fray…

It was all I could do not to collapse in very loud laughter and give the game away, as I came across Madam sharing her new found knowledge with the other – less politically sensitive newbie…as if she had been an expert for years…

So moving swiftly on…and comforting myself that people learn a skill best when they have to relay it to someone else…!

The wraps per inch around the room varied enormously from laceweight (well frog yarn I think…) to VERY chunky indeed.  Also we discovered the way we measured wpi varied from person to person as well.  I  hadn’t realised it was quite so subjective.

I was armed with needle sizes from 2.00 mm through to 10 mm – so that did not pose a serious problem, but the next hiccup was the felter peeps.

Now the day before I had been very clear that if you were intending to felt your finished item… superwash merino was not the ideal fibre to dye with… obviously that had been ignored or forgotten by the time they got to grips with the soap and bubble wrap on day 2.

I did not curse nor swear… in fact I was very calm as I went through their stashes with them, trying to identify just how much previous experience they had had with felt.  Lots it seems, but not very successful – “and what did you use?”  I asked… you can guess the reply me thinks.

Thankfully some ordinary sheeps wool was identified – still wet, and found to be feltable, along with silk and other bits and pieces which would make perfect embellishments and they were off again.

So all emergencies overcome, with the weavers quite happily started on their projects as well, we reconvened over coffee and got stuck into the climax of the day -  adapting or constructing patterns suitable for your own bespoke handspun wool (knitters (swatching) and non-knitters (fibres/handspun strung around cardboard).

Wow, what a really enjoyable afternoon.

I had no idea that a principle so basic to constructing anything with handspun, and that I enjoy so much such - ie swatching (knitted or woven) was considered a chore and a waste of fibre and time to others.

Surely you can’t make anything if you don’t know the basic construction of your materials?   Well – in house building and patios maybe, but knitting – nay it is magically assimilated…

So – deep breathes, and brainstorm took place…we covered all the things you needed to find out from the swatch and what you could do with the swatches afterwards.  All of a sudden I was privileged to see and metaphorically hear (in the silence as the cogs were visibly turning) the penny drop… 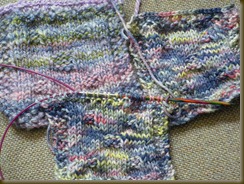 Much studious knitting/thread wrapping followed, along with calculator, pencil rubber swopping, and complex mathematical computations being checked and double-checked.  Madam even felt confident enough to confess her new spinning talents to the groups – to rapturous applause (I felt tears pricking my eyes with pride – from the reactions of some though I suspect they had been aware of this for many years though !!)

It all went quiet as concentration was required to finish this task, and I found myself wondering if I was on the home straight or it was going to be ambushed…

I so hoped nobody would start getting me to check their figures – my friends know my maths goes to pieces when I am confronted with an equation in a crowd… and then my contemplations were interrupted as a member jumped up and down and cried outloud – was she having a fit? – or even worse a heart attack? – goodness where was the first aid box ? – I hadn’t asked…

then the immortal words were cried as she theatrically re-measured her swatch and scrutinised her rather large jumper (which I had assumed had been knitted before she had lost a lot of weight)… “aagh… so that is why it wouldn’t fit…!”

Muchos happiness all around, along with handclapping, empathetic nods and in my case sheer relief at not having to remember resuscitation skills.  We seamlessly entered the final furlong – writing our own patterns to show off the handspun to its best… another one of those things that I do so automatically now, having long since given up on trying to convert patterns,but I wasn’t terribly sure or confident that I could convey how I do it…

The group by now had worked out how to decipher my disjointed thought processes, and with the aid of diagrams and a printed worksheet with only figures to be inserted (I had done one for the Canadian Knitters Guild years ago, and it scrubbed up nicely!)   this segment seem to go swimmingly – too swimmingly I somehow suspect, but by now was too tired to enquire further.  I don’t ask questions that I don’t want the answer to…. !

I am though forever an optimist…but I can’t help feeling inordinately proud of “my” little chickens as they left clutching their A1 working boards and dye-stained notebooks, replete and cognitively exhausted, but equipped with the knowledge and wherewithal to face and inform the brave new world with their newly-acquired wisdom.

At least they will be colourful and warm this winter.